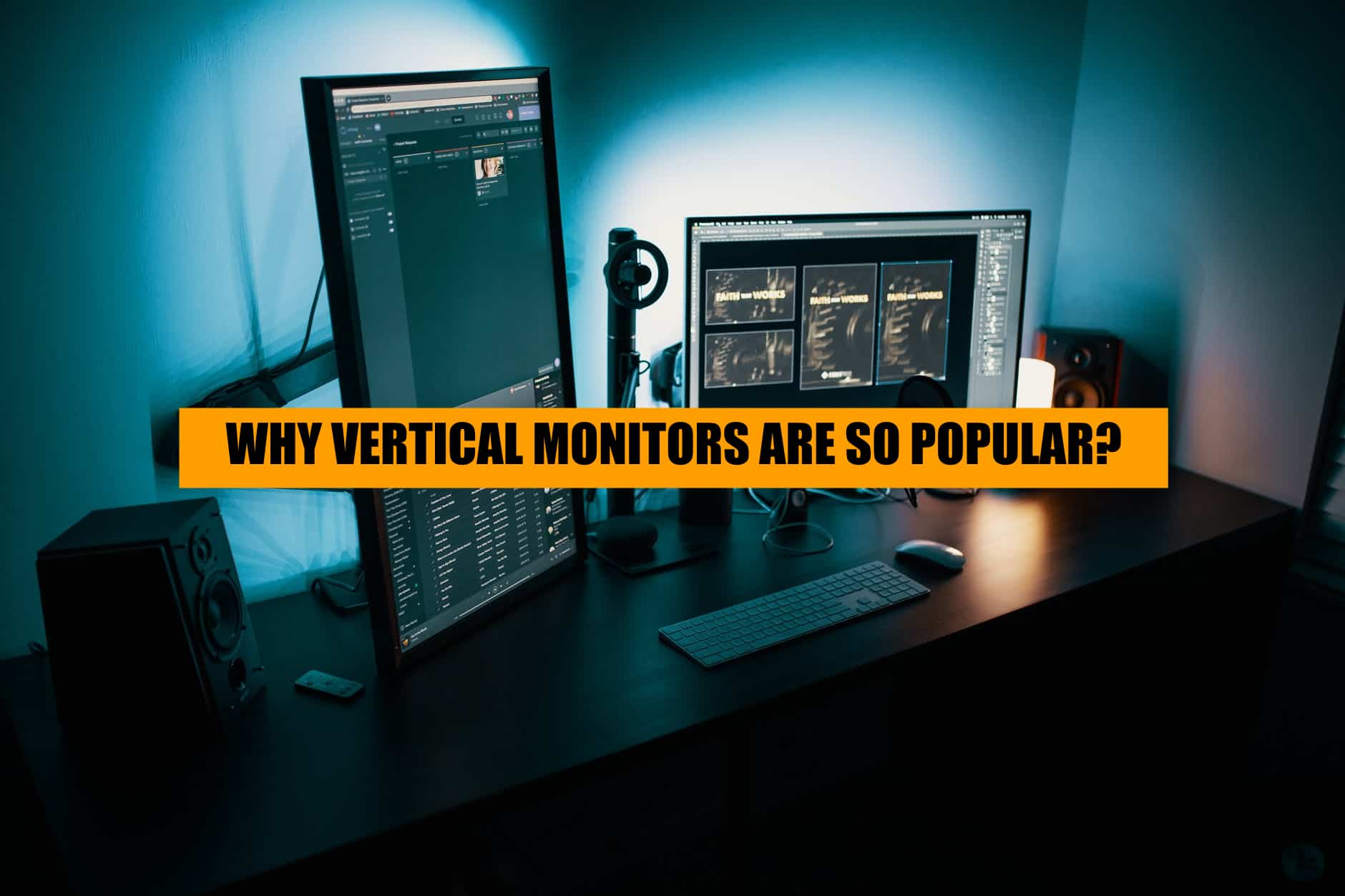 The landscape has remained the common orientation for monitors and has still retained its normalcy. However, programmers sparking the rising trend of more vertical screen space instead of horizontal. There are a lot more individuals (maybe even you!) who have thought of making the switch.

While a vertical monitor might seem odd, it is gaining trend among bloggers, content writers, accountants, and software programmers, as a vertical monitor setup allows you to view a larger number of lines of text easily, without scrolling much. As per a study it displays about 82% more text than on a horizontal screen. Also, due to the increased use of smartphones people are more habitual with vertical screens. 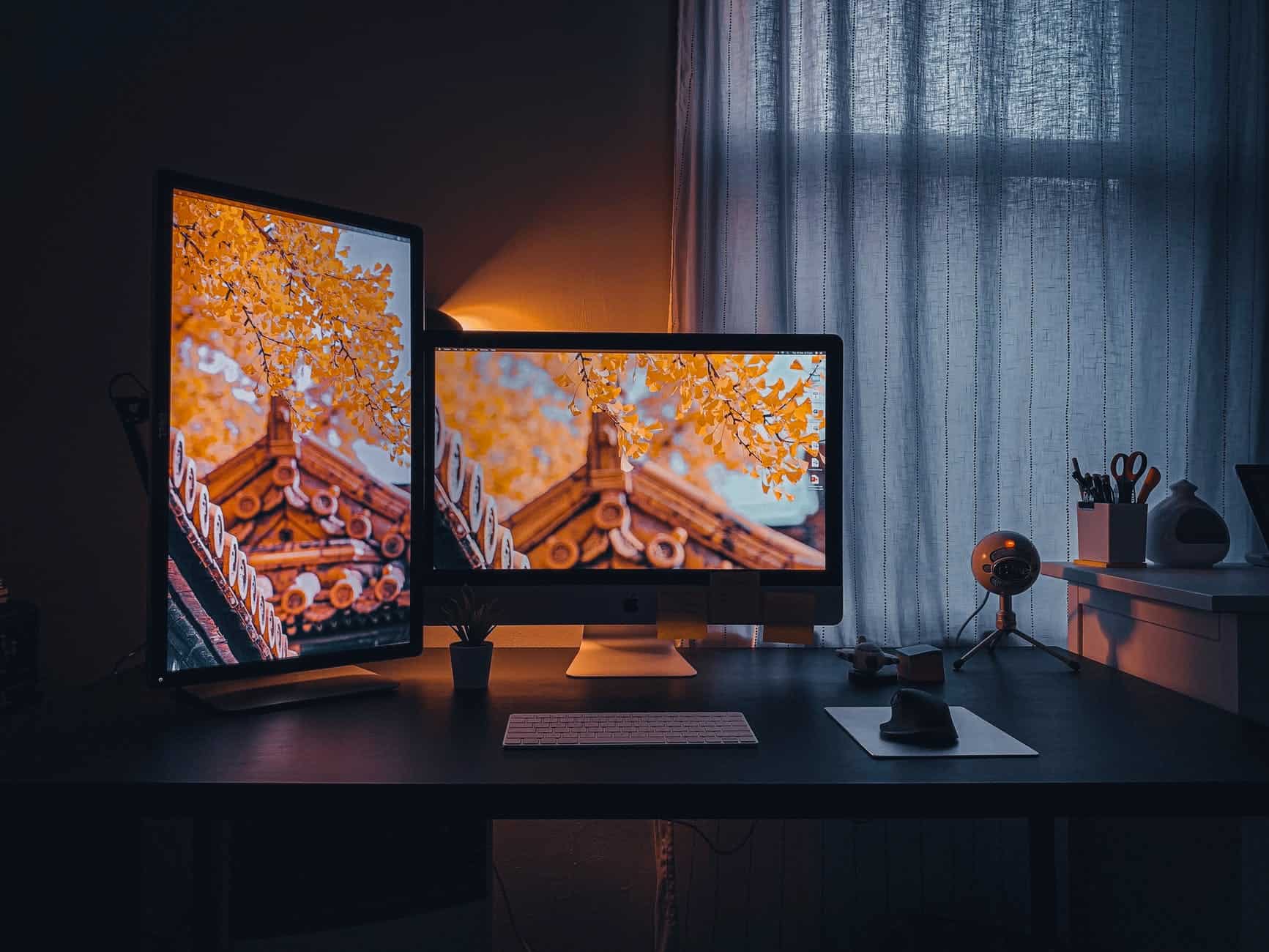 Comparing orientations is like comparing a boat to a car, they have two completely separate use cases and both are great at them. However, for the sake of competition, horizontal monitors tend to fit into more use cases as they are used more often. Generally, more often than not, you’ll be consuming some sort of content that’s best viewed on a wider, screen in landscape orientation.

In essence, vertical monitors fit very niche criteria. They aren’t that great for consuming movies, you won’t be enjoying gaming on them anytime soon either. So, what gives? Well, simple. Vertical monitors display written text in the best manner possible. From programming code to books, to Twitch chat, there’s something satisfying about being able to see all that information at once. Sometimes, horizontal space can just go unused!

Both sides of the users have their own set of arguments, and primarily people are reluctant to switch to a vertical screen as they feel uncomfortable with the new setup.

Advantages of A Vertical Monitor Setup

There are a number of advantages of a vertical monitor setup, but we need to understand that it depends on one use to another. Here are some of the advantages:

In essence, we’ve seen tons of individuals especially programmers move into vertical monitors over the years. While many swear by their innate advantages, you’ll end up finding most of these individuals do not completely shift to a standalone vertical monitor. Instead, they flip one of their secondary monitors and use it whenever they need the extra vertical space.

Becki and Chris, living in Buffalo, NY, run a technology tutorials YouTube channel, and share videos about photography, travel, film-making, etc. In one of the videos, Becky shares that she uses a Dual setup monitor for video editing, one of which is vertically set up. She further shares that this dual monitor setup has streamlined her workflow, and she found it more efficient. In her video, she was interviewing one of her radiologist friends, who found using a vertical monitor very convenient for his job and it inspired Becki to flip one of her monitors too.

With that said, there are always a few caveats to everything that glitters, here are a few when it comes to vertical monitors:

We have all grown up seeing the bulky, slightly curved screen and a square shape Cathode Ray Tube (CRT) screen, with an aspect ratio of 4:3. With technology, we witnessed the rise of Plasma, TFTs, LCD, and LED-based monitor screens.  Also, the connectivity technology evolved with monitors from VGA to DVI, HDMI, and USB-C ports, and hence the screen resolutions and clarity also improved over the period of time. The screen size/aspect ratio has also changed, and now we see more 16:10 and 16:9 monitors.

Most modern-day monitors are built using Organic light-emitting diode (OLED) technology, which is known for better color reproduction as well as viewing angles. With the invention of smartphones, the developers started building applications and tools in responsive design, the ones that work well in portrait as well as landscape orientation of the screen. This development paved the way for users who found vertical screens more convenient as their favorite websites, tools and software can also be viewed on the vertical monitors.

What To Look For In A Vertical Monitor?

Can I use any monitor Vertically?

Any horizontal / landscape monitor that can be rotated can also be used vertically as well. All you need to do is change their orientation in Window’s Display Settings. If they cannot be oriented, then they cannot be used as vertical monitors.

No, generally, they revolve around the same price as horizontal monitors. The reason why some brands might have more expensive vertical monitors is because of the added cost of VESA standard mounting. But, in terms of overall build cost, a vertical monitor is exactly the same as a horizontal one.

What are vertical monitors good for?

There are tasks and jobs that can be done more efficiently if the user is able to view more rows and have to scroll more. Such jobs include typing, content writing & editing, coding, graphic editors, video editors, etc.

Also, for websites, the foremost requirement is that they should be responsive, which means, they should look good on all devices, which makes it important for web designers to view and edit websites on the vertical monitor to replicate the portrait mode of mobile

When shouldn’t I use a Vertical Monitor setup?

If the vertical monitor is going to be your primary display, then, do not implement it in such a fashion. Instead, use a horizontal one. If you are in the market for a secondary monitor and you are a keen fan of reading text, scrolling through social media websites, or writing code, then a second vertical monitor is a no-brainer.

However, in no case should you buy a vertical monitor as your primary display. They’ll lead to a whole suite of problems as aforementioned, all applications are not suited for vertical setups.

Vertical monitors are far from a gimmick. They are useful, provide a lot more portrait information, and are extremely beneficial to use in certain applications. Ultimately though, getting a vertical monitor is totally reliant on your use case. If you’ve felt the need of needing to read more content at the same time; then, a vertical monitor is your ultimate best friend!

I work from home. To do the best possible job I need the right accessories - the right desk, the right chair, the right keyboard, the right monitor, etc. When I work I want to feel comfortable. I review everything that's related to home desk setup - focusing on Monitors & Keyboards.

wolfofdesk.com is a participant in the Amazon Services LLC Associates Program, an affiliate advertising program designed to provide a means for sites to earn advertising fees by advertising and linking to amazon.com, etsy.com, and other websites

We use cookies on our website to give you the most relevant experience by remembering your preferences and repeat visits. By clicking “Accept All”, you consent to the use of ALL the cookies. However, you may visit "Cookie Settings" to provide a controlled consent.
Cookie SettingsAccept All
Manage consent

This website uses cookies to improve your experience while you navigate through the website. Out of these, the cookies that are categorized as necessary are stored on your browser as they are essential for the working of basic functionalities of the website. We also use third-party cookies that help us analyze and understand how you use this website. These cookies will be stored in your browser only with your consent. You also have the option to opt-out of these cookies. But opting out of some of these cookies may affect your browsing experience.
Necessary Always Enabled
Necessary cookies are absolutely essential for the website to function properly. These cookies ensure basic functionalities and security features of the website, anonymously.
Functional
Functional cookies help to perform certain functionalities like sharing the content of the website on social media platforms, collect feedbacks, and other third-party features.
Performance
Performance cookies are used to understand and analyze the key performance indexes of the website which helps in delivering a better user experience for the visitors.
Analytics
Analytical cookies are used to understand how visitors interact with the website. These cookies help provide information on metrics the number of visitors, bounce rate, traffic source, etc.
Advertisement
Advertisement cookies are used to provide visitors with relevant ads and marketing campaigns. These cookies track visitors across websites and collect information to provide customized ads.
Others
Other uncategorized cookies are those that are being analyzed and have not been classified into a category as yet.
SAVE & ACCEPT