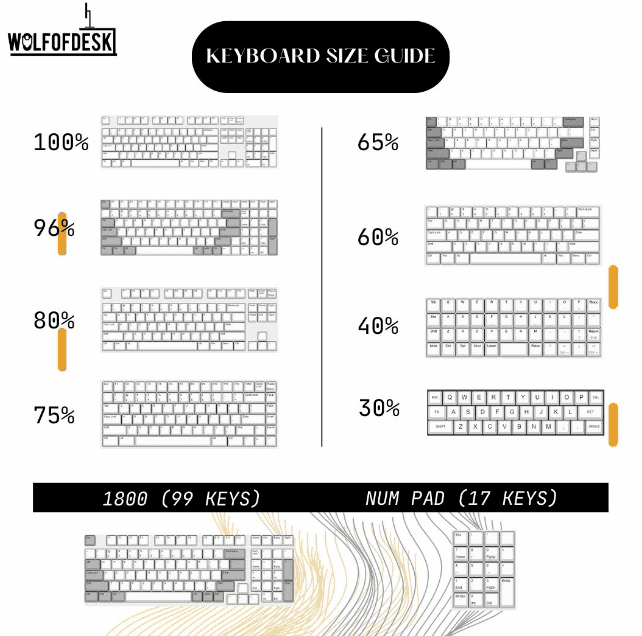 The keyboard has gone through various changes over the years. While they’ve been standardized to look the same to a certain extent, various keyboard sizes introduced over the span of a few decades have jostled some variety to the mix.

With that said, each keyboard size is meant for a particular purpose. A smaller keyboard, for instance, might not be great for an accountant who needs the Numpad but great for a typist who might not need it.

All in all, there’s a lot of variation between keyboard sizes. So, in this article, we’re going to go over all the differences between each keyboard and why you should opt for one or the other.

Here’s a quick look at all the size differences between each keyboard:

The full-sized keyboard is considered the first modern keyboard, both in terms of format and size. It’s what you most often see in offices and on desks. This is because it has all the features that a keyboard is known for.

For instance, it has a full-sized Numpad, FN keys, navigation keys, and GUI keys. While the keyboard did have its appeal in the olden times, unless and until you do some serious crunching, we suggest opting for a 60% keyboard instead.

While we’ll talk about the 60% later, one thing’s for certain, full-sized keyboards take up a lot of space. And, in most cases, an average Joe doesn’t end up using the keys that the keyboard has anyways. So, you are much better off with a smaller size.

It has all the same keys as a 100% keyboard, but the navigation cluster sections are combined with the number pad section of keys. This leads to an overall footprint reduction of about 3-5%, which is negligible in the grand scheme of things. So, all you gain is a slightly better form factor.

The reason why this format wasn’t extensively popular and still isn’t widely adapted is primarily that it poses no real advantage to the design it was based off of (the 100%.) That’ll be a common theme throughout these sizes, keyboard sizes that did not bring anything new to the popular were quickly obsolete.

If you do end up somehow finding an 1800 compact keyboard, you’ll end up with a slightly smaller footprint which might be useful if you have a cramped-up desk setup and need all the space you can get.

It has most of the keys that 100% keyboard has. The only significant difference is that the gaps between the sections have been removed, and the keyboard is made compact. The only dedicated keys removed from the keyboards are the navigation keys of Home, End, Page Up, Page Down, and Insert.

The layout is almost similar to the full-size keyboard, but they are not very widely used. As the gap between the sections is removed, the compact design obviously affects the typing accuracy.

At first glance, a 96% keyboard looks exactly like a full sized keyboard. Our primary issue with this keyboard type is the fact that it leads to a more constricted and poor typing experience since the section gaps are removed. Add onto that, it doesn’t really have a large reduction in size too.

TKL stands for Tenkeyless, as the right-hand side number pad (keys 0-9) are removed and has only about 87 keys. It is also known as an 80% keyboard. The gaps between the sections are also squeezed out, but what’s amazing about it is that the key size and the gaps between the keys are still good enough, for better typing accuracy.

Tenkeyless (TKL) keyboard is very popular due to its convenience and comfort, and most laptop’s keyboards are based on the concept of a Tenkeyless layout. It is also considered the most ergonomically sized keyboard, as it offers the perfect width between the elbows while using it.

If you prefer a minimalist and simplistic keyboard with all the keys, then this is the keyboard you should choose for your work desk:

I’m a big fan of TKLs. If you aren’t going to be crunching in numbers and just want a keyboard that’s primarily used for typing and editing, a TKL is your best friend. They are heavily modifiable due to their small chassis, and you’ll find tons of brands selling great hot-swappable keyboards.

Plus, while it doesn’t match the minimalism of a 60%, a TKL still looks great in a minimal desk setup. Or for when you are a power user and really need to take advantage of shortcuts to make the most out of your workflow.

All the gaps between the sections are eliminated, and there is only a minimal gap between the keys. Of course, the number pad is completely removed like the TKL, the arrow keys are provided towards the right bottom, and the navigation keys cluster (Home, End, PgUp, PgDn) is placed in the extreme right column in a straight line. Unlike full-sized keyboards, the right shift key and enter key are typically smaller in size.

Some keyboards provide the option to use function keys as multimedia keys, and there are windows or Mac OS compatible keyboards also available in this size. The 75% keyboard is popular among gamers, especially the mechanical keyboard version.

There are various layouts available in a 65% keyboard, especially with the placement of the arrow and navigation keys. In some keyboards, they are placed in a 2×2 orientation, while in some keyboards, you will find them in a single column at the extreme right.

The 60% size has quickly established itself as a size format that’s quickly rising through the tides. This is because its easily modifiable due to it only having 62-64 keys.

The mechanical version of the 60% keyboard is the most popular amongst gamers due to its compact size and easy customization with swappable keys. Usually, in a 60% keyboard, WASD is used for arrows, and similarly, other alphabets or special character keys are used for other navigation purposes.

The 60% keyboard is my personal favorite, you don’t always need to use your FN keys and shortcuts. And, for gamers who like the added space for their mouse, this keyboard is a blessing in surprise. Unless you really want to use shortcuts, I’d urge getting your hands on a 60% keyboard. It looks minimal and chic on any desk setup.

Alright, so the 40% is where you truly start to see some sacrifices being made to compensate for the smaller form. For instance, the 40% It has only 4 rows, and the top number row is completely eliminated, While the arrow keys and other navigation keys are retained, the keyboard is somewhat unusable for day-to-day tasks, especially if you deal with numbers.

The dedicated caps lock is also removed along with the semi-colon key, and the space key is also smaller. So, if you are a typist, you won’t be having a lot of fun managing the lack of a lot of keys that you’ve been used to.

There are not many keyboards available in this category, but we would like to specially mention Gherkin, which produces a DIY 30% mechanical keyboard. It has no other keys apart from alphabet keys, backspace, space, and the 2 function keys.

It is not exactly functional or usable, for that matter. But, if you really want an uber small keyboard, the 30% keyboard is a fun purchase.

If you have a TKL or smaller keyboard and now want to use a number pad as well, you can look for an external number pad. It has number keys, decimal keys, mathematical operator keys (+,-,/,*), Enter key, Num Lock, Delete, and Backspace.

Some of the keys are dual-layer operations combined with functions like page-up, down, home, end, etc. So, if you are someone who crunches numbers ever so often, a Numpad is a great accessory to have.

How To Choose The Right Keyboard Size?

And there are a lot of metrics that can inhibit you from choosing a certain size. For instance, if you have a small desk, a full-sized keyboard might not be the best option. On the other hand, if you just need to enter numbers, say, at a kiosk, then a Numpad makes sense.

Another example, I’m a frequent traveler and bring my keyboard along with me for the ride. If I have a TKL keyboard, carrying it around would be quite meaningless as I don’t use most of the keys that are present in the keyboard. On the other hand, a 60% keyboard is much easier to travel with.

Case in point, the right keyboard for you is paramount on you identifying your usecases. We’re going to be highlighting some key metrics that can help you in your decision-making process:

Your keyboard size doesn’t indicate much about your overall typing experience other than the functionality it can provide. To no one’s surprise, a full-sized keyboard is the most functional out of the bunch. But, that doesn’t mean that’ll other sizes are worse.

Ultimately, your decision on keyboard size matters strictly on how you intend to use your keyboard. I personally am using Keychron Q1 75% Keyboard. I wanted something compact. Since my desk isn’t the biggest and I’m not working with numbers anymore, I figured I wouldn’t need the full-sized keyboard and that 75% keyboard should be enough, and it is. My point is, if you feel like you don’t need the number, most likely you don’t, and you can get a more compact size.

I work from home. To do the best possible job I need the right accessories - the right desk, the right chair, the right keyboard, the right monitor, etc. When I work I want to feel comfortable. I review everything that's related to home desk setup - focusing on Monitors & Keyboards.

wolfofdesk.com is a participant in the Amazon Services LLC Associates Program, an affiliate advertising program designed to provide a means for sites to earn advertising fees by advertising and linking to amazon.com, etsy.com, and other websites

We use cookies on our website to give you the most relevant experience by remembering your preferences and repeat visits. By clicking “Accept All”, you consent to the use of ALL the cookies. However, you may visit "Cookie Settings" to provide a controlled consent.
Cookie SettingsAccept All
Manage consent

This website uses cookies to improve your experience while you navigate through the website. Out of these, the cookies that are categorized as necessary are stored on your browser as they are essential for the working of basic functionalities of the website. We also use third-party cookies that help us analyze and understand how you use this website. These cookies will be stored in your browser only with your consent. You also have the option to opt-out of these cookies. But opting out of some of these cookies may affect your browsing experience.
Necessary Always Enabled
Necessary cookies are absolutely essential for the website to function properly. These cookies ensure basic functionalities and security features of the website, anonymously.
Functional
Functional cookies help to perform certain functionalities like sharing the content of the website on social media platforms, collect feedbacks, and other third-party features.
Performance
Performance cookies are used to understand and analyze the key performance indexes of the website which helps in delivering a better user experience for the visitors.
Analytics
Analytical cookies are used to understand how visitors interact with the website. These cookies help provide information on metrics the number of visitors, bounce rate, traffic source, etc.
Advertisement
Advertisement cookies are used to provide visitors with relevant ads and marketing campaigns. These cookies track visitors across websites and collect information to provide customized ads.
Others
Other uncategorized cookies are those that are being analyzed and have not been classified into a category as yet.
SAVE & ACCEPT